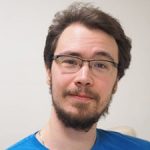 I started programming when I was 15. Completed a large number of projects, big and small, and each new project is a challenge and a possibility to learn something new. I think that in our industry, permanent education is a necessary part of being a professional. This attitude is one of the reasons my technological stack is pretty broad, but it’s not shallow at the same time. I also consider Agile methodology an important technique with all things coming along as CI/CD, code reviewing, and proper version control there to help developers and teams to be more productive and overcome challenges and uncertainty. Sometimes I can be meticulous at critical production code sections, at the same time, can quickly build a prototype when needed.